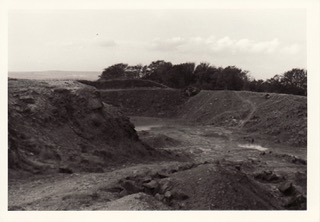 Yorkgate Quarry was the last piece of land on The Chevin to be actively quarried.

Like East Chevin Quarry, this land has changed hands several times, finally finding itself under the ownership of Leeds City Council.

In 1891, farmers John and Joseph Hird granted permission to quarrymen William Clapham of Guiseley and William and Thomas Maston from Otley. The contract to extract sandstone from the quarry was for two years ending 1st Ocober 1893 and included the requirement to keep the road in repair.

In 1949, planning permission was granted for the surface excavation of sandstone. At the time of the application the company employed seven quarry workers and blasting for the extraction of stone occurred about once a fortnight.

However, by 1967 there were local concerns about Aberford Quarries, the owners at that time, extending their quarrying activities. Aberford had requested that the public footpath which runs along the top of the quarry be diverted to enable further extraction of stone. They wanted to extract stone over the lip of the summit and 150 metres down the slope. However, in 1949 permission to extend their quarrying was made with the proviso that they should not affect the outline of The Chevin.

A local campaign “Save The Chevin’ developed and funds were sought to oppose this request. Between 1967 and 1973, local respected men including Arthur Gemmel, Eric Cowling and Edward Winpenny mounted a successful campaign to prevent this from taking place. Local fears were that further incursion into the hillside would destroy the outline of The Chevin and that blasting operations could affect West Chevin Road, water courses and cause a landslip. After a long and bitter battle, the Minister of Transport decided that the footpath would not be diverted due to its amenity value. This overturned the agreement made by West Riding County Council for Aberford to expand their operations and divert the footpath.

According to records held by West Yorkshire Archeological Society (WYAS), four sgtone walls of an eighteenth centruy enclosure meet in the middle of the quarrying complex. They adhere to the contours of the quarry which suggests that quarrying pre-dates the Enclosure movement.

In 1777, a Commissioner appointed to make awards under the Enclosure Act stated that the land that we now know as Pelstone Cross was to be ‘for and forever continued as stone quarries or places for the collection of stone’. The quarry changed hands several times over the years and we believe that quarrying finally ceased on The Chevin around 1924. This is however unconfirmed.

In 1865, Pelstone quarries were on the market – ‘twelve acres of very superior grazing land’, containing ‘a bed of stone of silicious grit, free from fissures, and pronounced by many eminent practical men to be of excellent quality and almost inexhaustible’. ‘The stone is imperishable, impervious to wet, proof aginst weather of all descriptions, and has been tested and proved to be perfectly fire-proof’. (Bradford Observer, 9.8.1866)

Leeds City Council finally purchased the land from an Emma Norfolk of Grassington for £10,000 in 1983. The land has remained in council ownership ever since and is now part of the Chevin Forest Country Park.

On a flat surface on the top of Pelstone Crag there is what appears to be abandoned quarry work, but to date we have no certainty as to its purpose or origin. There are also the names of men who presumably worked at the quarry and decided to carve their names for posterity!