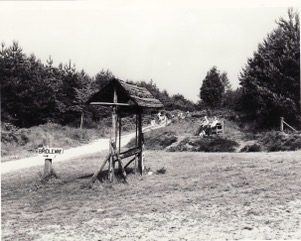 When the Fawkes family were awarded much of the land that later became known as the Danefield Estate (in the Otley Land Enclosures of the 1780s) it is hard to picture what The Chevin would have looked like. It was previously used as common land which probably maintained an open landscape with local people exercising their rights to graze sheep and cattle, harvest bracken, collect stone and cut turf and peat.

However, it must have been an impressive sight for Walter Fawkes to look out from his home at Farnley Hall (on the opposite side of the Wharfe Valley) and witness the first plantations being laid out under his direction on an ambitious and grand scale in the late 1780s. This was the start of the planned afforestation on this part of The Chevin and first gave rise to the name Danefield Wood.

At this time the plantation woodlands that made up these parts of The Chevin would have been privately-owned by the Fawkes family and access to the public would have been limited. As well as developing forest plantations, the Fawkes family also created a Deer Park and stocked it with exotic game (on land on the other side of the Holbeck water course). What we refer to today as the Danefield Estate would have been separated into Danefield Woods and Caley Deer Park. In the early 1900s there are references to a small toll booth at which anyone wishing to use the private track through Danefield Woods from East Chevin Road would have had to pay a fee.

It is hard to imagine today but in 1942 most of the trees on the Danefield Estate were felled to provide timber for the war effort. This would have had another dramatic impact on the local landscape and it is because of this that today few trees are over 70 years old.

After the end of the Second World War in 1946, Major LeGender G. W. Horton-Fawkes of Farnley Hall decided to make a very generous gesture of giving Danefield Woods and Caley Deer Park (110 hectares in total) back to the people of Otley saying:

“It occurs to me that an open space which can be beautified by trees and preserved in a natural state might offer an opportunity as a memorial to all who fought and furthered the War of Freedom on all fronts.”

“..it shall be a public open space where the people of Otley and others can enjoy the fresh air, the beauty, the rural interest and the spiritual refreshment which are here available in the immediate vicinity of the town. It should not be a town park in the sense of a carefully laid out area with flower beds and fields for set games, but should be more like a national park where everyone can walk and climb and find solitude. There should be paths which enable people to walk around comfortably, but not so many that there is no spice of adventure in trekking across country. The steepness and broken quality of the land make this possible.

At the same time it is intended that the land, or part of it, should be made productive. The object of this is partly that in years to come the products might help to pay for the proper maintenance of the area. But even more, that the people of Otley may better appreciate the responsibilities of owning land. This is the case of communal ownership of land, which is much more frequent in continental countries than in Britain, and the community should appreciate that if they own land, it must serve the nation not only through amenity but by growing useful crops.

Forestry and tree planting are skilled work and it is essential that such work on the Chevin should be supervised by a competent and experienced forester…It is important that this man should be the best available and there should be no undue haste in appointing him. There must also be a head woodman or foreman who lives nearby and can take charge of the conduct of operations and will work with the men.

It will be beneficial to employ four or five men at a time as this economises supervision and as far as possible the same men should be engaged each time so that they may become accustomed to woodland work. All this work involves the skilled use of spade, mattock, axe etc. and the more difficult operations may take many years to learn.”

The Foundations for a Country Park

In 1956 Reginald Rawling was appointed as the first Head Forester for the Danefield Estate to lead the next generation of foresters, employed by Otley Urban District Council to replant most of the woodland that had been felled.

It was the vision of Reginald Rawling and his life-long dedication that established the area that is so well known and enjoyed today. By the time of his retirement in 1973 the Danefield Estate had been transformed from a bald landscape to a forested area with trackways laid out, car parks, drainage ditches and picnic benches. The Danefield Estate won a number of national forestry awards, mainly because of the excellent way that both commercial forestry and managing land for recreation, landscape value and wildlife had been inter-twined.

The tasks carried out and the necessary skills required by the Danefield Estate foresters were varied – ploughing soil, choosing the right kinds of trees for the soils and to cope with exposure to adverse weather conditions, tree planting, growing their own trees from seed, high pruning, selective thinning, producing different age classes of trees, as well as laying out trackways, planning drainage ditches and culverts, maintaining dry stone walls, fences gates and stiles, and managing the land for wildlife. Many of the trackways required significant efforts to lay enough stone to prevent them getting muddy and allow forestry extraction vehicles to get near the different woodland areas. One of the tracks near here used stone and rubble from Otley Railway Station, and the Shawfield car parks were created using stone from houses near Union Street where Waitrose now stands.

The Need For Ongoing Management

New woodlands can not simply look after themselves, they require many years of ongoing work if they are to establish successfully and provide productive timber. A key objective has been to create plantations of uneven aged, mixed species. This is partly achieved by thinning, underplanting and inter-planting trees singly and in groups, supplemented by natural regeneration where it occurs.

The conifer trees act as a nurse crop to the broadleaved ones and where practical will be removed over time but there always has to be a degree of flexibility in managing mixed woodlands as there are many factors that cannot be foreseen. Without thinning the young plantations there will be too many trees per area and they will be competing for light and root space, leading to being blown over in high winds and a reduction in the value of other trees that are damaged in the process.

Two Men With The Same Vision

“You must have had a vision too because this is just how I imagined it should look.”

In an interview for a local paper towards the end of his life in 1994 Reginald Rawling said:

“Few Otley folk realise that they actually own a piece of the most beautiful land in Wharfedale – and they pass it every day without a thought. Leeds City Council took over the reigns of management of The Chevin from the old Otley Urban District Council, and is under an obligation to look after the Danefield Estate and to practice good forestry there, but at the end of the day it was given over so that the people of Otley could feel the responsibility of being landowners.”

Reginald Rawling retired in 1973 and passed on the role of Head Forester to his son Keith Rawling, who had also worked on the Danefield Estate alongside his father since 1958. With the reorganisation of local councils in 1974 the responsibility for managing the Danefield Estate passed from Otley Urban District Council to Leeds City Council. Keith Rawling continued the tradition of carrying out excellent forestry management and in 1977 he was appointed to oversee the refurbishment of the derelict White House buildings on the other side of The Chevin.

The purchase of new land by Leeds City Council in 1977 around Surprise View and the White House saw the land area double in size and the establishment of a team of Rangers who would be based at the White House. During these years the team of foresters carried on working from the cabins on the Danefield Estate until the cabins became uninhabitable and the foresters moved to the White House to work alongside the Rangers.

It is thanks to these early generations of foresters that the Danefield Estate has become one the finest new woodlands in Leeds, if not West Yorkshire.

Reginald and Keith Rawling kept a scrapbook during their time on the Danefield Estate.  You can view this scrapbook here: Part 1 Part 2 Part 3.  Please do not reproduce without permission.