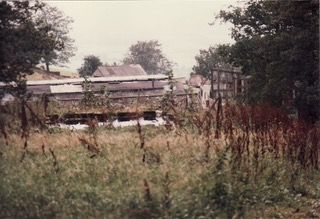 Today all that remains in the fields 400 metres west of the White House is a fairly modern stone building that is used as a storage barn, but the rear end of it is much older and was once part of a building known at different times as Dibb Wood Cottage, Dibb Cottage or Chevin Cottage. The origins of the word “dibb” are unclear but it may derive from an old English word meaning “hollow” or “dip”, which could refer to the relatively level land here and in Sinclairs Field in relation to the steeply sloping land above and directly south of here (which is shown on some maps as “Great Dibb” and may have occurred due to a landslip many years ago).

Under the 1783 Otley Enclosure Act the land in question was allotted to Reverend Henry Wilson, Vicar of Otley. Shortly after this, the land was acquired by Stephen Todd who was born in Leeds. His family held land in various parts of Yorkshire and he came into ownership of other plots of land in Otley and on the Chevin.

Stephen Todd tried to improve the area by establishing plantations of trees although none of them now remain. In a lecture entitled “Our Valley” given in 1856 at the Otley Mechanics Institute, the Reverend J. Hart tells us about this:

“A Mr. Todd, a kind of Paxton of a buried generation, bought large tracts and planted it after a plan, suited to improve it as a prominent feature in the Vale of Wharfe. We owe much to Mr. Todd, his descendant is Mr. Holroyd, who inheriting his ancestors happy taste, often comes to a pretty cottage built half way up the selfsame Chevin and welcomes with English hospitality, all who can appreciate a splendid view.”

Stephen Todd died in 1808 and the land was inherited by his nephew Joseph Holroyd, a dyer with premises in Sheepscar, Leeds. In 1844 Abraham Parkinson Holroyd bought the land for £1 620. He was a stuff merchant who lived in Sturdie House, Roundhay, Leeds.

Sometime between 1844 and 1850 Abraham Holroyd built “Chevin Cottage” on the Dibb land, and it was possibly a “second home” or “country retreat” for his family. The 1851 Census shows a farm labourer called George Wright living at “Chevin Cottage” with his wife and niece. The 1861 Census reveals Abraham’s second wife (Keturah Holroyd) staying in the cottage, with a farm servant and his wife.

In 1872 Abraham Holroyd died and the property and land was put up for sale.

In 1872 John Lawson bought the cottage and the land, and probably added extra dwellings. At the time he was living in a dwelling that today is called Dowgill House on Bondgate, and he owned a tannery behind that house.

Census records in 1881 to 1911 refer to 3 or 4 dwellings that were originally lived in by members of the Lawson family who were involved in the tannery business, and then by other families who worked in printing and engineering businesses. John Lawson died in 1897 but the property and land stayed in the Lawson family. In 1903 Fred Lawson (son of John Lawson) submitted plans to convert Dibb Cottage into a larger dwelling and build various outbuildings, but this was not carried out.

“The little cottage that was obviously built a long time ago was a rather cute little cottage. The later cottages were very plain, rather utilitarian and semi-detached I think. There were little allotments all hedged in, in what is now the field bought by Sinclairs. My grandfather left everything in a Trust, his family could not sell anything. Gradually everything was split up. The Lawson Trust rented the land to the Airey family and then sold it to him.”

Electoral Registers show people living in these cottages until the late 1950s, often 4 families. In the mid-1920’s John and Edith Blackburn lived in one of them – John was the son of Senior Blackburn who at that time had the tenancy of Jenny’s Cottage tea rooms at Surprise View. It seems that John Blackburn moved out of Jenny’s Cottage to live here with his family, before returning to Jenny’s Cottage in the 1930’s to take over from his dad when he retired from serving refreshments.

During the 1960’s and 70’s the dwellings had been demolished or converted into buildings used for a pig farm that was run by the Airey family. During these years local residents recall that they were not to go through this land and a sign was in place stating “Private Property, Keep Out”.

In 1979, Leeds City Council purchased the pig farm to increase the size of Chevin Forest Park. Head Forester, Keith Rawling, oversaw the renovation of the White House and he also negotiated the acquisition of this land from the Airey family in 1985. He recalls:

“Behind one building there were dead pigs and all sorts of things. An Environmental Health Officer attended a meeting on-site and said to Mr Airey “This is indiscriminate tipping” to which he replied “Oh no, we know exactly what we threw down there.”

“The Aireys ran a swill-fed pig farm and after they went it was littered with rats. Leeds City Council took all the farm buildings down to clear the land and set fire to a lot of the material. As we did this, the rats came out and we shot them. One building had a lake of thick, black, stinking water underneath it. As we drained it off we found a sea of knives, forks and spoons that had come from schools and hospitals in the swill.”