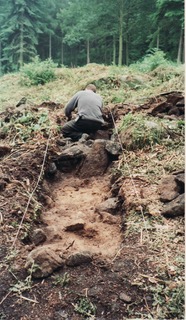 There are two Iron Age/ Roman-British sites on Danefield in Poolscar Wood. They are listed scheduled monuments (SE 22171 44608).

The monument includes an oval enclosure which originally had a small annexe on the north side but now destroyed by a forestry track.

The age of the sites is uncertain and it is thought that the sites were occupied by people throughout different periods of history.

There was a trial excavation here by west Yorkshire Archeology Service in 1996-7 when trenches were dug to try to better understand what had once been here.

An Interpretation Board is to be found at the larger of the two sites where it is believed that there was an enclosed hut circle, hearth and earthworks. It is bounded by rubble-banked enclosure made up of boulders and occasional smaller stones. These banks were typically 2.5m wide and up to 1m high. It seems thee were different types of walls built here. including buttressed orthostat wall (upstanding stones in a row) and boulder walls.