Today, The White House serves as a base from which Chevin Forest Park is managed, but for much of its life it was a farm, which at various times also offered refreshments to passing visitors (from a wooden hut on the western side of the White House). In recent times it housed a Visitor Centre for Chevin Forest Park, a role now provided from the adjacent café building.

The Origins of The White House – the First 50 Years

Prior to the Otley Enclosure Act of 1783, the land where The White House stands was part of Chevin Common which local people could use for grazing their animals and for collecting fuel and building materials. Under the Enclosure Act this plot was awarded to Thomas Flesher, a tanner, and his brother Laurence Flesher, a woolstapler. By 1797 both brothers had died and Laurence’s son, Benjamin, inherited the land. The plot was then acquired by Henry Barker, a member of an old Otley family, and it stayed in the ownership of his descendants for over 150 years.

Some sort of farm building was probably built on the site in the early 1800’s, but it is uncertain by whom, and by 1850 it was a ruin.

The building was not occupied again until 1870, when Ben Naylor and his family were living there. He was a stonemason, so it may be that he had been employed to make the building habitable again so that it could be let out to tenant farmers. It seems that the middle section formed the original building, and the two outer sections were later additions, the former external walls still being visible inside. The section to the west shows evidence of a large opening and would have been used for animals or a vehicle.

From 1880 until the 1890’s The White House tenants were George Sexty and his family. He was described in the Census as a “milk dealer” and kept cows on the land around The White House, which was not wooded at the time and may explain the origins of the Vacca Wall about 200 metres

up the slope (Vacca roughly translates as “cow” and the wall would have kept cows from wandering up to the top of the Chevin).

The Golden Age of Tourism –Tea Rooms and Lodgings

The creation of the Leeds to Otley railway in 1860 (and various bus services) led to more visitors from the city and surrounding towns. The business potential was soon realised and in 1889 The White House was described as keeping “refreshment rooms”. They would have provided a most welcome respite for those walking up the steep Chevin slope from Otley. Successive tenants seem likely to have kept this tradition alive to some extent (including Enoch Wigglesworth, George Shepherd and Fred Clements) and there are also references to providing lodgings and holiday chalets.

The Last Tenants of The White House – and a Ruin Again

Another tenant, Miss Mary Harland, moved into The White House in 1927 and lived here for 28 years, until her death in 1955. Mrs. Doris Wyatt and her husband lived here with Miss Harland for about three years in the early 1950’s. In a letter to the Wharfedale & Airedale Observer she tells us that there was no electricity or gas or running water. They had to use oil lamps and fetch their water from the nearby spring. 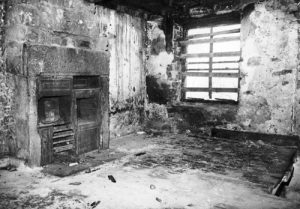 A Change of Ownership

In 1966 a plan was submitted by the Otley & District Rover Crew to turn The White House and outbuildings into a Scout Hostel and Scout Headquarters, the project was started but not completed. In the early 1970’s the White House was used as a base for youths on a job creation scheme.

In 1972 The White House buildings, together with some plots of land were purchased by the Sam Chippendale Foundation. Sam Chippendale was a successful property developer, originally from Otley. In 1976 a planning application was made to erect three detached houses at White House Farm but this was unsuccessful.

Writing prior to the purchase of The White House by Leeds City Council in 1977, Keith Rawling recognised the need for an interpretation centre as the newly expanding country park sought to grow from the Danefield Estate to double in size by encompassing land around Surprise View and The White House:

“To envisage the establishment of a country park with all the attendant history and interest, it must be realised that a high percentage of these things are never going to be either known about or understood by the majority who visit the Park without some centre and someone to whom they can refer. Literature is fine but accompanied with visual aids and verbal explanations it becomes far more interesting and personal, it begins to live.

Having stated the need, the next question is where to establish such a centre. There happens to be on the central slope of the Chevin an establishment known as The White House, it is the shell of a former dwelling and attached cowhouse, although at present dilapidated and in need of major renovation there are several factors that would justify its re-furbishing as an interpretation centre.”

Keith Rawling was appointed as Head Ranger in 1977 to oversee the refurbishment of The White House (he had previously worked on the nearby Danefield Estate as the Head Forester).

After much hard work The White House interpretation centre (or Visitor Centre) was opened in 1980. Inside The White House a number of rooms were opened up to the public that included a typical Dales farmhouse kitchen, displays about the Chevin’s wildlife and history, and a shop as well as office space for a team of Countryside Rangers.

Soon after The White House was restored, the Rangers set about delivering educational events for local community groups, schools and general visitors to Chevin Forest Park. During these years a team of foresters carried on working in the Danefield Estate until their cabins became uninhabitable and they moved to The White House to work alongside the Rangers.

The White House Café was previously a stone barn with hayloft which needed to be completely taken down before being rebuilt in the early 1980’s as a single storey stone building. Today, the cafe is run as an informal visitor centre, giving visitors access to leaflets, hot drinks and toilets.

A third building was completed in 1985 for nature studies and is today called the Education Building. A large amount of stone was required for this because there was only a timber chalet standing there beforehand.

Do you have any photos of The White House and the surrounding area before 1970 that we could have a copy of for our Chevin photo archive? If so please get in touch.

White House Photobook – This is a low-res .pdf of the photobook created by Barbara Winfield, Chris Tomkins and Richard Marsh detailing the history of the Chevin’s most iconic building, the White House.  Part two is here