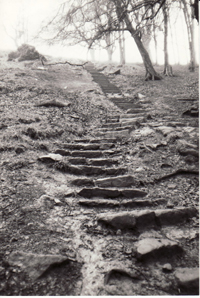 Many people enjoying recreational walks around the present Chevin Forest Park may be unaware of the antiquity of many of the paths and track ways they are treading and their links with life in the area going back many centuries.

The earliest routes crossing the site would probably have been established in prehistoric times (up to 12,000 years ago). It is highly likely that nomadic hunters and gatherers passed along the ridge of the Chevin, traveling to East Yorkshire where they could obtain the flint needed for their tools and weapons. Evidence relating to this era was revealed when ploughing took place in the area near to Bramhope Lane on the Danefield side of the Chevin Forest Park prior to the replanting of trees after the Second World War. A quantity of flint scrapers, knives and arrowheads was found, which date back to the Mesolithic, Neolithic and Bronze Age Periods (hence the name “Flint Wood”). Later, when more permanent settlements became established with the development of farming, there may also have been seasonal movement of people and animals up and down the hillside  to take advantage of the resources and shelter of the valley. On the lower slopes of the Danefield area two Iron Age sites have been identified and tracks would have been created around this area by their occupants going about their daily routines.

Once established, the route across the Chevin ridge would have been used by subsequent travelers, traders, settlers and resident tribesmen, each choosing their own path across the wide expanse of open wasteland. The Romans would have followed this prehistoric way on their journeys between Lancaster, Ilkley, Tadcaster, York and the East Coast and eventually built a more permanent roadway to the south of the present Yorkgate, marking a more direct route to Adel and beyond. Evidence of this has been found during a number of archaeological digs. In 1956, investigations on land owned by Moor View Farm revealed part of the road surface and kerbs, but few traces of its route can be seen today. It is thought that the stones from this road were used in the walls built in the surrounding area following the enclosure of land in the 1780’s.

During Mediaeval Times, and right up to the Otley Enclosure Act of 1783, the open moorland on the Chevin was common land on which the people of Otley had the right to graze their livestock and gather fuel and building materials. Drove roads would have meandered up the slope in wide curves, enabling the cattle to be taken from the lowlands to the pastures on the hilltop and to be brought back to the town at night. They would also link up with the surrounding townships enabling livestock to be brought to and from the market in Otley, and markets further afield. What is now called Miller Lane probably formed part of such a road.

Pack horse tracks were used by travelers to transport goods on horseback and would have usually followed the contours of the Chevin landscape to find the best routes over the hill. As they were able to travel in single file, the tracks had more acute bends than the drove roads, would usually cut a long diagonal line across the slope and often form a V shape with steep sides (called a “holloway”). When one track became unusable, another one was created alongside it. A good example of a “holloway” can be seen next to the present path which goes diagonally from the White House up to the Chevin top. Another is in the Danefield area leading downwards from the car park at Shawfield.

With the growth of population and trade in the 16th to 18th centuries the packhorse tracks and drovers’ roads became inadequate and there was a growing need for more reliable local and long distance transportation routes. As a result, Acts of Parliament enabled Turnpike Trusts to be created which gave the responsibility to local people for their local road systems.

In 1753 the Otley Turnpike Trust was set up and in 1755 the “Old Leeds Road” (now East Chevin Road) was “turnpiked”. Because of its steep incline this must have been an extremely difficult road to negotiate, whether on foot, horseback or in wheeled transport, and almost impossible in bad weather. The Turnpike Trust improved, and possibly straightened, the existing highway, creating a better surface and drainage. Tolls were charged to use the road to help with the cost of its upkeep, toll booths being built at the bottom of the road at the junction with Gay Lane and at the top at the junction with the road to Harrogate (Carlton Bar). A number of carriers used the road and there was also a weekly coach service to and from Leeds, traveling along East Chevin Road until the 1840’s. Despite the improvements to the road, passengers had to leave the coach and walk up/down the hill because of its steepness, aided by stone mounting block steps situated at the side of the road. At the top of the hill, what is now East Chevin Farm was an inn (first called the Plough Inn and then the Wilson’s Arms). This must have provided welcome rest and refreshment for passengers and horses alike, as would Dade’s Well as a source of drinking water part way up the road.

When the former common lands of the Chevin were enclosed and divided up amongst local landowners in 1783, a more ordered system of public and private roads, trackways and footways was set out. Many followed existing, well used routes which were perhaps straightened, widened and generally improved, but new roads and tracks were also established. There were metalled and walled roads for wheeled traffic, cart tracks through fields giving access to the farms and footways for those traveling on foot. Roads were now confined within walls, restricting travelers to the defined route. Examples include Yorkgate, East Chevin Road (then called the Otley and Leeds Turnpike Road), West Chevin Road (then called the Otley and Menston road), Johnny Lane (then called Intack Lane, and later called Jockey Lane and Stoney Lane) and Miller lane (then called Carlton Road).

Over the years new tracks were also made for the extraction of stone from the quarries on the Chevin. One of them can be clearly seen zig-zagging down from Pelstone Craggs through Manby Field and the fields below. In the late 1800’s the Pool Quarry Railway railway line was built  to take stone from the quarries near Caley Crags to the station sidings at Pool Station.

Designated “footroads” included the pathway, still in regular use, that passes to the east of the White House, up the flight of steps known locally as “Jacob’s ladder” or the “Cat steps” and onwards over the Chevin Ridge to join the path to Guiseley. Another lies to the west, leading from West Chevin Road up to the Yorkgate road.

The Danefield Estate was owned by the Fawkes family of Farnley Hall until after the Second World War. A private carriage road (now a bridleway) allowed access from East Chevin Road to Caley Hall. Any member of the public wishing to pass through on foot had to obtain permission and at one time there was a hut by the gate near Holbeck where a toll of twopence was collected.

With the ever increasing number of vehicles, it wasn’t long before the need for a further improved road system to and from Otley became apparent and in 1843 the New Leeds Turnpike Road (now the A660) was opened. This took much of the traffic away from the Old Leeds Road, which became “unturnpiked”, and also led to the eventual closure of the Wilson’s Arms around 1850/60 (now a private house). Improved roads to and from Leeds, Bradford, and surrounding towns and villages, together with the opening of the railway line to Otley in the 1860’s, made Otley and the Chevin much more accessible and in the late 19th century there was a significant increase in the number of tourists visiting the area.  Today, East Chevin Road (Old Leeds Road) is once again a busy thoroughfare and brings many visitors to Chevin Forest Park on foot, bicycle, horse and by car.

In recent years, the Chevin Forest Park has been developed for walkers, cyclists and horse riders with designated bridleways and improved accessibility for the disabled. Part of the Ebor Way, a long distance route from Helmsley to Ilkley, passes through Danefield and along the Chevin ridge.  A network of paths and tracks criss-cross Chevin Forest Park as they have done for centuries, many of them following the routes of the ancient drove roads and pack horse tracks, but now used solely for recreation.