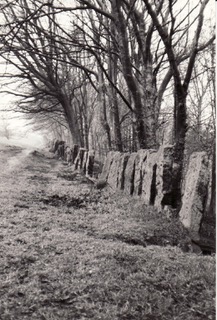 An interesting feature which marks the southern-most boundary of the Old White House is called the Vacca wall. This consists of a stretch of large erect stone slabs, probably put in place by the owner or occupier of the steep hillside immediately below. The Vacca wall on the Chevin runs east-west and can be reached from Otley or from the Surprise View near the Royalty Pub. There is no definite reason as to the origin of the term “Vacca”,  the most likely origin is that  a Vacca  was originally a place where cows were able to graze, or a dairy farm. The origin of the word comes from the latin word Vacca meaning cow.

These Vacca walls were often near  quarries where large stone slabs could be obtained. There are quarries in the Chevin area which would have supplied the necessary stone. They were built as field enclosures associated with the vaccary system of cattle farming and they also were a place where working oxen were kept.

Another suggestion about the term “Vacca” is that it simply denotes a boundary marker, possibly of Roman origin, and there are the remains of a Roman Road near the top of the Chevin.

There are several other Vaccary walls in the Pennine area, some of probable medieval origin, one of the best known being at Wycoller, a small village about  3 miles south-east of Colne in Lancashire, near the border with West Yorkshire.  This area specialised in cattle rearing. One of the functions of this Vacca enclosure, and others, was to protect the cattle from attacks by wolves and other predators. They were also useful for keeping deer and other wild animals out of the pasture area kept for cattle grazing.

Other examples of Vaccas are at Hawkshead in the Lake District and also an area just to the north of  Rochdale, which is an area pitted with former quarries where the stones came from.